Uncle’s fleas & Captain Ginger have been doing grand business around the festivals of the South West in Teignbridge and Exmouth. Captain Ginger and Uncle were the MCs for Teignmouth’s grand celebrations of the Olympic Torch relay as it passed through town. Captain Ginger didn’t quite manage to carry the torch, but he did enter the egg & spoon and 3-legged races…sadly, they came in last, but in true Olympian spirit, they did so in style. 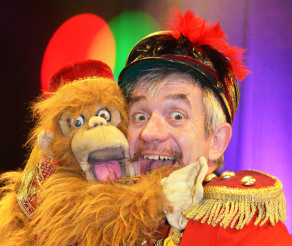 Exmouth Festival was damp and drizzly to start, so Uncle’s Tinglary (barrel pian) entertained in the dripping interludes, but it turned-out bright and sunny in the afternoon, with tiers of children standing on the new, gaily-painted grandstand planking to see the Herculean skills and diaphanous beauty of the fleas. Shortly, we shall all be off again to infest the International Eistedfodd in Llangollen, Wales and then to some Yorkshire schools and Larmer Tree Festival…I’ll report back from those later.

After a successful private sponsorship campaign, we have managed to raise the money to create ‘Uncle’s Imaginarium’, together with some merchandise in the form of badges and stickers. We have taken our first booking for The Imaginarium at Cardiff Harbour Festival for the end of the Summer, where it will feature Uncle’s Flea Circus, Boy Gacko’s ‘Trunk Show’ and Shabby’s ‘Ave A Banana – 1-Man Band’. What more could Wales want…or need?!

Uncle’s Corner: Fleas, Monkeys, a Tinglary and an Imaginarium