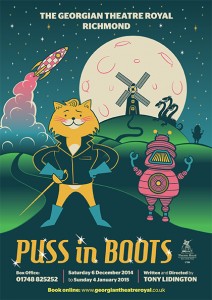 Puss in Boots wowed audiences of all generations with its fast-paced plot, foot-tappingly catchy songs and amazing special effects. Produced by our own professional team, it broke box office records to become the highest-selling pantomime in the Theatre’s history.

In the expert hands of talented writer and director, Tony Lidington, this was Puss as never seen before. Forget the swash-buckling cavalier types, this cat had a hip leather jacket and seriously cool attitude! Set in the early rock and roll years of the 1950s and 1960s, the plot unfurled around evil scientists, crazed robots and deliciously scary monsters. The action even ended up on the moon!

This was the 5th consecutive in-house pantomime Tony has directed for the Georgian Theatre Royal, Richmond and the second he has written for them. It broke all box office records at the theatre and explored whole new territory in pantomime themes by transforming the wicked ogre into the evil Mon(sieur) Santo, whose genetically modified flour led to the cat being able to speak, before escaping to his moonbase in his remote–controlled drone flying around the auditorium – a British theatre first! After the Georgian feast of Cinderella in 2013, this Puss in Boots was relocated into the white heat of technology of the 1960s and set on the moon, whilst still retaining the historical accuracy and authenticity of British pantomime! 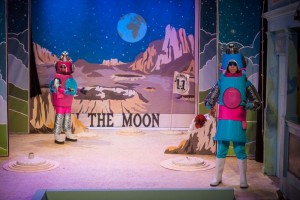 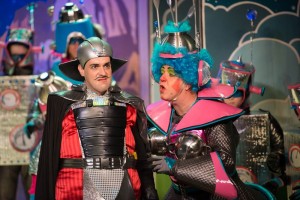 This production was clearly loved by audiences and critics alike:

“This is Puss in Boots breaking the mould.” The British Theatre Guide

“A fast and furious pantomime where the laughs just never end.” The Teesdale Mercury