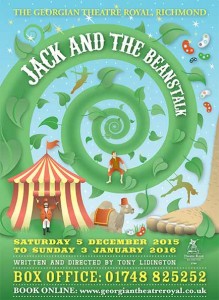 “Jack & the Beanstalk” – Christmas 2015. Tony’s 6th pantomime written and directed especially for the Georgian Theatre Royal, Richmond. This time set in a Nineteenth Century circus troupe – “Circus Legume”. All the actors boast circus skills and the theatre will be transformed once again. Book early, as the Georgian’s pantomimes are now widely-regarded as the best in the North!

Tony is a sought-after expert on the history and practice of British pantomime, he regularly contributes to national radio and television programmes on the subject and is renowned for his rollicking Christmas shows which combine an acute knowledge of the historical roots of the form with a contemporary awareness and love of the absurd.

Historical images for the “Pantomime”