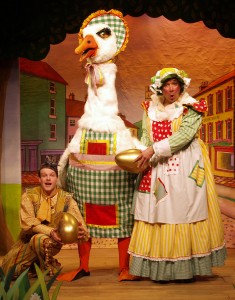 For the first time ever, the Georgian Theatre Royal produced its own professionally cast pantomime, supported by the Janet Seymour School of Dance, Reeth. The classic fairy tale Mother Goose was directed by the well known actor and producer Tony Lidington who has starred in Joey- King of Clowns and Dan Leno both in Richmond and around the UK. Mother Goose was played by the fantastic Dominic Goodwin who is a well known face around The Georgian Theatre Royal and was accompanied by a talented and versatile cast.

This exciting traditional pantomime promises fabulous music, dance and comedy in a very family-friendly version of this popular tale. Richmond boasts the perfect venue to introduce children of all ages to live theatre, being a historic Georgian playhouse and one that’s so intimate you will start believing you are on stage with Mother Goose and friends!

Mother Goose was the first ever in-house professional pantomime that the Georgian Theatre Royal produced. It was exciting and challenging to be involved in but as a Theatre we were extremely proud with the finished result. Not only did Mother Goose appeal to children of all ages but adults surprised themselves by how much they enjoyed it.

Our main aim when producing this pantomime was to produce a production that incorporated the historical importance of the Georgian Theatre Royal with a modern twist. . We wanted the production to be a truly family-friendly, Christmas pantomime with spectacle, music, slapstick, romance and fun. It was a theatrical Christmas treat – just as pantomime should be!

From the very beginning we wanted everything to be fresh, new and tailor made for the Georgian Theatre Royal, this included the set, the costumes and the script. The first thing we needed to organise though was a director, Tony Lidington has been heavily involved with the Theatre for many years, he was passionate about pantomime and he was prepared for the challenge!

“It has been a terrific act of bravery and vision for this lovely little theatre to produce its own Christmas pantomime – there couldn’t be a more appropriate venue for a traditional Christmas entertainment! It is a great privilege to have been invited to direct this piece, which we hope will be the first of many, many such home-grown shows.” – Tony Lidington, 2010

“There’s no need to borrow a child to go and see this production: take the child within, you’ll have a great time.” -Helen Brown (British Theatre Guide)

“This is a pantomime to please the connoisseur and it will involve and excite youngsters and parents.” -Kevin Berry (The Stage)