Written and performed by Tony Lidington
Directed by Dominic Goodwin 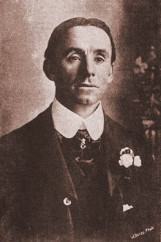 Dan Leno was the greatest Music Hall star of all time: the first stand-up comic, the best-loved pantomime dame and the world champion clog dancer with a strong line in character-based skits… he was, quite simply, the comic genius of his age and his work laid the foundations for contemporary British comedy. Billed as ‘The Funniest Man on Earth’, he created the modern pantomime role of the Dame and what is now called “stand-up comedy”.

Dan Leno blazed a trail long before Ronnie Barker’s monologues, Les Dawson’s wordplays, David Walliams’ cross-dressing, Michael Flatley & Max Wall’s feet of flame or even Chaplin’s struggling little tramp. With live musical accompaniment, this romp through entertainment history brings the Nineteenth Century showman to life and with it, an understanding of how British comedy has evolved.

Dan Leno – The King’s Jester toured theatre venues in the north of England in Spring 2011. 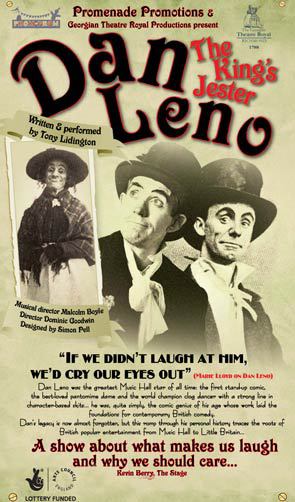 “Tony Lidington continues to enthrall with his echoes of the entertainers of long ago.”
– The Stage

“Lidington, inhabits the soul of Leno with daring and accuracy.”
– The Northern Echo

“If you press historical re-wind and keep your finger on the button until you get to 1863,  you’ll find Dan Leno making his debut, aged 4 at the Cosmotheca Music Hall in Paddington, London.   He was billed as Little George, the Infant Wonder, Contortionist and Posturer and he would go on to become not only the King’s Jester, entertaining Edward VII at Sandringham, but also the highest paid funny man in the world at the time.

Fast forward to 2011 and we find Leno-the-laughter-maker in the expert hands of the show’s author, Tony Lidington, who also performs this extraordinary story with an almost super-human energy.

Lidington introduces himself as Dan Leno at Baldwyn’s Park mental institution in March 1904, six months before his early death at the age of 43.  He’s ably assisted by his doctor, an excellent Malcolm Boyle, who is obviously fond of his charge but must keep a firm hand on his patient’s madness.  There are times when Boyle stops the action as Leno escapes hilariously into the audience like a wild man. Lidington’s ebullience bulges with Dan’s spirit and this production captures the vibrancy of his life from the very beginning. “Good evening ladles and jellyspoons…”  he quips to the audience before producing a boiled egg and telling his story of the boiled egg and the wasp. He goes on to show his expertise at clog dancing, story-telling; and his invention of innovative characters is pure comedy genius. He appears with great gusto, dressed as a dame in the second half to show us how he devised and performed Mother Goose and Widow Twankey.  Lidington’s performance is insanely accurate and massively impressive and definitely worth travelling to see.”
– Helen Brown, The Northern Echo

“Tony Lidington continues to enthral with his echoes of the entertainers of long ago.
Here he takes on the guise of Dan Leno, the most influential of all the music hall greats. Not a tribute show this and not a meticulous Leno impersonation.     Though in certain poses and expressions Lidington, with the tousled hair and the eyebrow make-up, does look remarkably like Leno.
Lidington’s regard, respect and admiration for Leno is palpable, indeed his championing of the subjects of every one of his biographical shows has these qualities. His performances are instructive without seeming to teach or to preach. They entertain. They bring pulsating – warts and all – life to a name on a fading playbill.
Thanks to Lidington the thread of Leno’s influence can be traced through to the comedians of our grandparents’ generation and up to the present day. Lidington shakes the dust from Leno’s comic songs and patter. He stresses Leno’s desire for respectability and his mistrust of committing his talent to the newfangled vogue for recording. The man’s failing emotional state (the show is staged in a mental institute), could do with some attention.
No one who sees this impressively staged entertainment will forgot the manner of its closing. Lidington steps back from a phonograph which is playing Leno singing his famous Hard Boiled Egg ditty. A small clockwork Leno figure is on the machine. Crackling recordings are all that is left of him.
Lidington has done Leno’s memory a great service.”