Written by J.H.Williams.
Abridged and read by Tony Lidington. 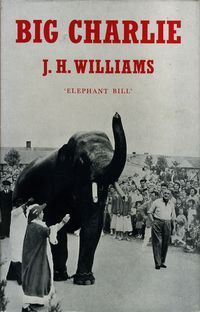 Colonel “Elephant Bill” Williams’ amazing story of how, in the summer of 1957, the largest elephant in captivity – Big Charlie – was moved from Butlin’s Holiday Camp in Ayr, Scotland, to Butlin’s, Filey, Yorkshire.

In May 1957, an advertisement in The Times caught Elephant Bill’s eye. Butlin’s Ltd was offering £1,000 in cash for the immediate safe transport of the largest elephant in captivity from its camp in Ayr to its camp in Filey – a distance by road of 350 miles.

Colonel JH Williams had earned his sobriquet “Elephant Bill” as a result of his experiences working with elephants in the jungles of Burma and, intrigued by the advertisement, he volunteered his services. As did 3,500 other people, for the problem of moving Big Charlie, a 5 and a half ton male elephant, and one of the finest tuskers in captivity, had captured the popular imagination.

Some of the suggestions for moving the elephant were eccentric in the extreme, but not long after the advertisement appeared, Elephant Bill found himself engaged as elephant consultant – with very ill-defined duties – to help Mr Willie Wilson of Glasgow transport Big Charlie.

Although Big Charlie was accompanied at all times on the journey by his gentle and devoted mahout, Shaik Ibrahim, the job was made much more hazardous by the fact that Big Charlie was on “musth” – or in season – and that Billy Butlin’s demands for constant publicity posed tricky problems for all concerned.