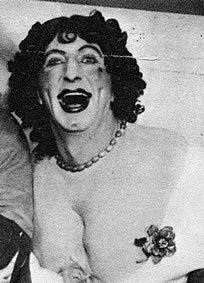 A 3-part story about the life of Douglas Byng – the celebrated female impersonator of the 1920s & 30s. Tony met Dougie in 1986, just before Dougie died at the grand old age of 94 and saw one of his last performances given in the very theatre that Julian will be performing. Dougie was the doyen of the bright young things and a forerunner of glamorous female impersonators such as Danny La Rue or Dame Evadne Hinge.

The series was broadcast at 3.45pm on Fridays 2nd, 9th and 16th December 2012. Further information can be found on this BBC 4 website link.

From the Pier Productions website: Julian Clary plays camp cabaret star and drag artiste Douglas Byng – “the highest priest of camp” in a series of three autobiographical monologues by Tony Lidington. Born in 1893, Dougie was a comedian, actor, revue artiste, songwriter, legendary pantomime dame and the most famous cabaret star of his day. Billed as “Bawdy but British”, his professional career lasted for over 70 years. The stories were recorded at Brighton’s Pavilion Theatre where Byng gave his last performance.