Babes In The Wood 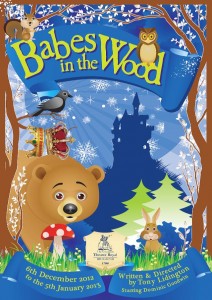 ‘Babes in the Wood’ is one of the oldest of pantomime stories – beginning life as a ballad in 1595, it was first staged as an opera, before becoming a pantomime as “Harlequin and Cock Robin: or The Babes in the Wood” at Drury Lane in 1827.

Written and directed by Tony Lidington this lively and fun for all the family production featured puppetry, cross dressing, two babes, live music and a host of singing and dancing. The production ran for 47 shows at The Georgian Theatre Royal to critical acclaim. 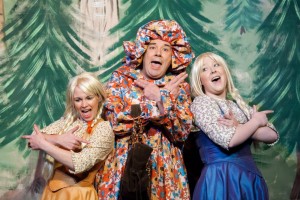 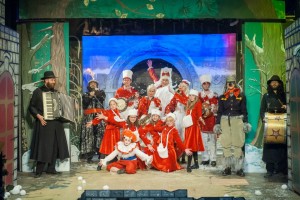 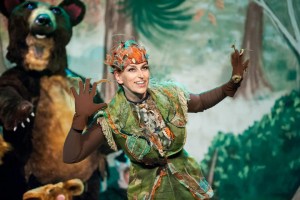 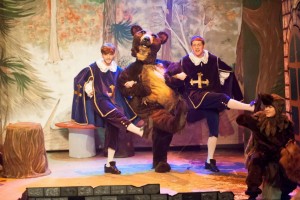 “A fast paced script, brilliantly directed with great music and a smattering of audience participation make for an exceptional night out……This is not a show that uses extravagant sets, transformation scenes and pyrotechnics to engage the audience, it relies instead on humour, craft, love, warmth and excellent music.”
– The Yorkshire Post on ‘Babes in the Wood’ 2012

“That master showman and esteemed performance historian Tony Lidington creates pantomimes that are so wonderfully appropriate for the Georgian Theatre Royal. They explore elements and aspects of our showbusiness heritage but are not steeped in aspic. They are alive, vital, bursting with wit and spontaneous energy.

For Babes in the Wood, his third panto here, Lidington goes for an Eastern European setting with a long, bearded band processing up and down the tiny stage. He brings in cute puppets by the score and makes them essential to a plot in which humans are reduced in size. His babes are a pair of teenage girls (Katie Tranter, Sarah Kearsley) and a pair of nice but rather daft princes (Andy Kelly, Tom Burton) plus there is an ambitious tap dancing rabbit with a Hollywood fixation.

Then there is a dame (Dominic Goodwin) to be cherished and loved – feared, in a nice way, if you are within her grasping distance. Goodwin has made himself an essential part of Christmas in Richmondshire and way beyond the skyline. Big on size, big on affection and very much a dame for this theatre.

If there are ghosts at the GTR, and there must be, they will love this pantomime. It could not be in safer hands.”
Kevin Berry, The Stage
“Nursey Goodnight is the priceless Dominic Goodwin, a one-of-a-kind Dame who can produce a ripple of laughter with the flick of an eyebrow and a tsunami of the stuff even with a bad joke.”
Helen Brown, British Theatre Guide
The full review here

“The potential Kate Middletons are played by Sarah Kearsley and Katie Tranter, with Andy Kelly and Tom Burton as the princes and these four were excellent. Penelope McDonald is a poetically eloquent woodsprite and Gary Bridgens is in authentic Leeds-market-barkermode as the villain. The cast also plays instruments alongside the versatile duo Daniel Bowater and Jack Burton.”
Pru Farrier, Darlington and Stockton Times

“One of the joys in this treasure-chest of a show comes from the delightful puppetry, the miniaturising of the characters, and – rare in these days – a rattling good story to follow. You could take your granny, you could take your mid-thirties bachelor vicar, you could take your five year old and all would relish the show.”
Stephanie Preacher, York Press
The full review here