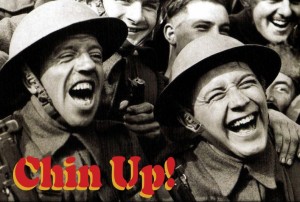 Working with Torbay Council & Doorstep Arts, Chin Up! is 2-year project, in collaboration with Doorstep Arts, Torbay District Council & the Armed Forces’ Community Covenant. It explores the theme of entertainments during armed service and resulted in a pierrot troupe of young people performing at Babbacombe Armed Forces day and an exhibition of the history of concert party – written and devised by Tony Lidington called “From Agincourt to Afghanistan” (see panels below). The next stage is to develop an oral history project with the Young Volunteers based at The Edge in Brixham, who will use this material to inspire another performance (this time by Juicy Theatre) and an exhibition which will tour in May/June 2016.

Poppies is a project in collaboration with DAISI (Devon Arts in Schools Initiative), working in Teignmouth & Dawlish to create a First World War concert party pierrot troupe, which will perform at Exmouth Festival in May 2016. This project is funded by the Heritage Lottery Fund.