Co-written and Directed by Tony Lidington. 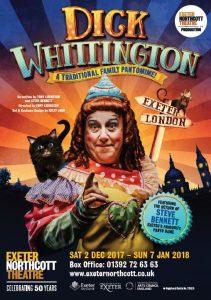 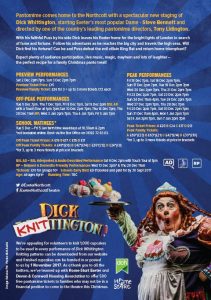 “Many of the best pantomimes add local quirks to the festival staples. Tony Lidington’s Dick Whittington for the Exeter Northcott follows this format, making the adventurous hero (Emily Essery) a Devon lad searching for a new job after his ‘grab a granny’ disco in Exeter Quay is condemned by Health and Safety inspectors.

The distinctly West Country notes can be seen elsewhere too. The London Docklands have a notably pirate-like look to them and the energetic Essery woos the aristocratic Alice Fitzwarren (Annabel Warwick) with an accent only found west of Bristol.

It’s the small details throughout that make this a delightful piece of Christmas theatre. Kelly Jago’s hand-drawn set designs have a faintly medieval aspect to them, before morphing into a tropical beach. Costumes are lushly designed, with highlights including Alice’s expansive bloomers.

Along with being lovingly crafted, this pantomime is consistently kind to its audience and is particularly suitable for younger children. Steve Bennett as Dame Sarah Suet banters with the crowd like a kind aunt, cracking jokes about Bake Off soggy bottoms and making vegetable puns.

There’s enough joy here that when the characters board the Megabus home from Plymouth, you wish they’d stay a little longer.”

“EIGHT years ago the south west’s Great Dame, Steve Bennett, popped out of the Northcott Theatre at Exeter University (where he had held sway in his petticoats  for 15 years)  to do a bit of shopping.  Well, you know what these women are!

But, with a basket full of new comic goodies, he’s back in style as Dame Sarah Suet in the 2017/18 Christmas show, Dick Whittington

There’s general rejoicing at the Northcott, both by the new management team and by audiences.   I saw the show at 10am on a Tuesday, in an auditorium full of school children not quite warmed up to the early hour for a show, half of whom were on coaches stuck in traffic and consequently filed in nearly 30 minutes into the show

It’s a tribute to the excellence of the script and the performers that they brought the hilarity, energy and colour of traditional pantomime  through, gently but determinedly seducing the audience into the more typical squeals, boos and hisses.

The really beautiful sets and costumes, designed by Kelly Jago, create the perfect setting for magic and mayhem.

Dick Whittington (Emily Essery) has been turned out of the disco he runs in Exeter when the Health ad Safety Executive found rats in the premises. He sets off with his faithful cat Puss to find his fortune in London, where the streets are paved with gold (or so he believes)  We meet him sleeping in the snow, Puss at his side, and visited by forest creatures. Enter the glamourous King Rat, in the charismatic personage of Jeffrey Harmer.   Of course, his plan is to fill London with ratlings and reign supreme, but our hero stands in his way.

Steve Bennett’s frequent sidekick Gordon Cooper returns to the Northcott as Captain Darling, with Martin Reeve as Alderman Fitz­warren and Annabel Warwick as a terrific Alice, much more interesting and spirited than usual – and what a voice!

It’s splendidly staged with an excellent band. The company, with Steve at its core, takes the show back to the great days of panto at the Northcott. A terrific show for all the family, and it’s on until 7th January. Don’t miss it.