After spending 2 years in sunny Devon since graduating, working on various brilliant projects with Uncle Tacko and Promenade Promotions, I have decided to move to the North East where I am working with Backscratch Theatre, Theatre Sans Frontieres, Jack Drum Arts and The Georgian Theatre Royal. But first, a little thank you….

I first met the Reverend Uncle Tacko when I was student. I saw a call out for performers

interested in street performance, variety and who played a musical instrument. I didn’t think i had a chance in hell as my saxophone skills were very rusty indeed and I really had no idea what the gig was all about! However, I got the gig and became a member of the Pier-Echoes and spent summer 2010 touring south west seasides – singing, dancing, telling gags, eating fish and chips and swimming in the English Riviera. This experience changed everything – everything I believed about live performance, about British tradition and about the role of theatre in society.

For the last two years, I have been on a sort of internship with Uncle Tacko and 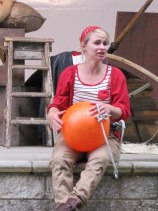 Promenade Promotions turning my hand to everything including stage management, arts administration, project management, tour booking, street performance, theatre in education, oral history, publicity and improvisation (in all situations). I was lucky enough to be assistant stage manager for Dan Leno at the Georgian Theatre Royal, to tour East Devon with the Common Players in Smuggler’s Gold, to attend artist’s residencies at Greentop Circus and Beaford Arts, play Sinbad at the Georgian Theatre Royal, to tour UK primary schools and festivals with Munch & Crunch, to administrate oral history project Silver Screens, to stage manage Captain Ginger and the Flea Circus, to look after the Prom-Prom website and to
lead the Sidmouth Torchlight Procession dressed a wacky professor. These, and countless other opportunities have provided time and space for me to learn everything about my trade and have lead to many other jobs and opportunities. 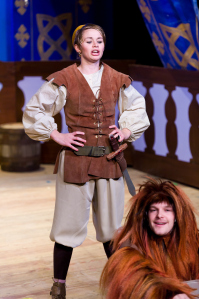 I’m going to be a little further away from now on, but I very much hope to be involved with many more Prom-Prom projects in the future and can’t wait to work with Tony again on this year’s pantomime, Babes in the Wood, at the Georgian Theatre Royal.