On Thursday 17th March, a very large estate car with Uncle Tacko  at the wheel and navigator Bunny with the map and with many strange, old and wonderful instruments stuffed into the boot made it’s merry way across Dartmoor via Winkleigh (pronounced Wink-lay) to Beaford  for the third and final ‘Breathing Space’ weekend. Having been greeted by everyone’s favourite dramaturg David Lane, Uncle and I applied ourselves to the task of cooking dinner for the assembled companies with jam roly poly with custard and pink sprinkles for afters. Our large bottle of cider was cracked open and the lively discussions began. 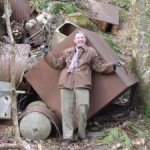 Through the course of the weekend we were joined by a variety of interesting people with a variety of backgrounds and all local to the the South West. They were (in order of appearance)…Jon Croose, Hugh Nankivell, Pat Allison, Sarah Goldingay, Sam Wells, Mischa Eligoloff, and Ben Ballard. Some stayed for days and some only hours but everyone contributed to the discussions and was able to offer a unique perspective. 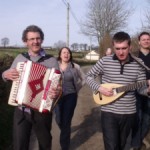 On Saturday evening made our presentation – a walk through Beaford’s surrounding countryside and woodland at dusk, stopping at appropriate locations along the way to present an idea or project we had been discussing.

Breathing Space, over the course of 3 weekends, has enabled Prom-Prom to initiate a  patchworking process between people with interconnected and overlapping interests who are able to offer a  plethora of diverse skill sets. Without the time and space offered on this programme, it is unlikely that these people would have been able to meet each other. Plans have been hatched and schemes have been schemes….some may never come to life and some definitely will. 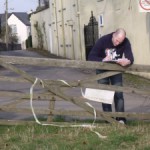 Patchworking is the stitching together of apparently separate ‘pieces’ of work or community activity as part of a programme of rural arts. It avoids the ghastly business term of ‘networking’ and places the connections between people firmly in the human, craft and interpersonal realm, rather than that of the business suit or soulless office. We wanted to start trying to find a language that used aspects of heritage that we valued and were applicable to our trade/industry. Patchworking is a cultural activity and may be a political act. We connect apparently disparate initiatives and provide a means of achieving greater impact and a sense of warmth. It is owned by the makers. It is an heirloom.