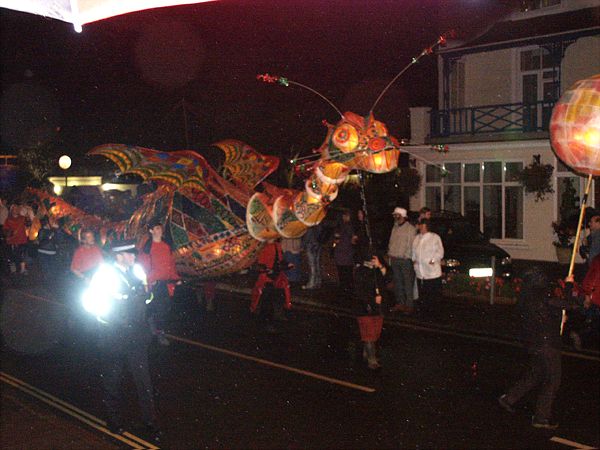 The Night of Dragons had been in the planning for nearly a year, but it was only with 2 weeks to go that I knew I would be there – not just working on it, but directing the whole two-hour, outdoor extravaganza for a cast of 400 and an audience that could have reached 3000!

Sidmouth International Folk Festival has a long and proud tradition, with many participants involved for decades…with beards to match! My involvement has been as a performer over the last 8 years with The Pierrotters (Britain’s last-remaining professional seaside Pierrot troupe) and Poppets Puppets (the bastions of nonsense in the kids’ glade). However, directing large, spectacular events is a common part of my work – having created outdoor shows for companies like Welfare State International, Major Road and Opera North, as well as pantomimes for the Liverpool Everyman, Leeds City Varieties and Wakefield Opera House.

My work is very varied, but there is a common strand running through it all and that is trying to combine art with accessibility – or to put it another way, create good quality popular entertainment.

I believe that performances should reflect and reflect upon their communities: so the opportunity to work on “Dragons” with such a wide variety of multi-cultural influences, combining professional and participatory artists across a range of artforms, was an exciting chance to explore new forms of expression and have fun into the bargain.

So, I had a Chinese dragon, an African dragon, the dragons of fear in Samia Malik and Leon Rosselson’s songs, a dragon band, a dragon choir, some Punjabi dancers (not sure what their dragon connection was, but they looked good), a St George and the Dragon (played in mumming style by Jim Woodland and Marilyn Tucker) and 100 morris dancers.

I have to say that I was quietly confident of the staging and management of all the above – but 100 morris dancers? I knew that Paul Wilson (the musical director from Wren Trust) had had meetings with Windsor Morris and I knew that John Tams had written a tune. This, I thought, bode well, for Paul had been working on the project right through and told me that Windsor Morris seemed a very sorted bunch and I had been a fan of John Tams ever since I saw the Albion Band in the Mysteries at the National as a spotty teenager who delightedly discovered that rock and folk could combine with theatre to create a life-affirming performance event. However, the thought of trying to co-ordinate 200+ jingling feet, 15 or more sides – each with their own vision and version of the dance and a posse of hobby-horses ready to cause mayhem, filled me with a mixture of concern, panic and delight…I must confess, the anarchist in me was smirking away!

The week of Sidmouth arrived in a blaze of sunshine and my early meetings with Windsor Morris and the Morris advisors were calm and smooth: the dance was set, the tune was catchy, we just awaited the one group rehearsal on Thursday morning…

Thursday morning arrived and the rain had begun. Nevertheless, nigh-on 150 morris dancers arrived to learn the dragon dance. I ineffectually tried to marshal events through a microphone whilst the real organisation was done in old-fashioned, low-tech style with the authoritative voices onstage of Pauline from Windsor Morris and Sue Swift. In our 2-hour rehearsal, the dance gradually took shape, changed a bit, then we changed the musicians’ locations, then had a chaotic run-through, a quick re-think, a bit of re-direction, another run-through and there – we’d done it…well, at least everyone was onstage, the music had fitted and everyone said they knew what they were doing! We agreed the next meeting as the interval of the show, with everyone in costume, ready to perform for the audience.

Friday night arrived: the rain had been torrential for 2 days. The camp-site was a squelchy quagmire and the arena was a muddy toboggan run. I had descended rather inelegantly on more than one occasion down the scoop of mud that called itself the auditorium and my clothes were caked in a way that I remember from my footballing days at primary school. The day was both long and arduous with the competing demands of hundreds of performers, tired technicians, the kind of rain that would float an ark never mind a dowse a dragon and the pressure of time. Nevertheless, we started within 5 minutes of our advertised time and at the interval, I could see the morris dancers preparing, so all seemed to be going to plan…

The performance of the Serpent Dance was a triumph! I found the combination of different sides and their winding, rhythmic dance interpreting John Tam’s catchy tune really quite moving. It was a triumph over the elements, it was a triumph over logistics, it was a triumph of community participation in a project that combined many kinds of performers and many kinds of cultural backgrounds into a single, enjoyable, spectacular event. As the serpent dance wound around the stage, it united sides, it joined the old and the new, it insinuated a positive aspect of the dragon mythology. It sounded and looked beautiful and, for me, was one of the most successful elements of the production. This success was only possible with the help, support and work of the many professional and participatory people on the project, to whom I should like to extend my thanks. 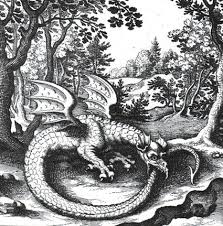 The last word should be with the hobby horses, who as the last dancers left, poked their heads around the side of the stage to cock one last snook at the crowd…the anarchist in me continued to grin!