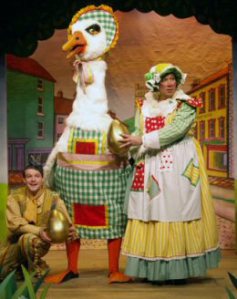 For the first time ever, the Georgian Theatre Royal produced its own professionally cast pantomime, supported by the Janet Seymour School of Dance, Reeth. The classic fairy tale Mother Goose was directed by the well known actor and producer Tony Lidington who has starred in Joey King of Clowns and Dan Leno both in Richmond and around the UK. Mother Goose was played by the fantastic Dominic Goodwin who is a well known face around The Georgian Theatre Royal and was accompanied by a talented and versatile cast.

This exciting traditional pantomime promises fabulous music, dance and comedy in a very family-friendly version of this popular tale. Richmond boasts the perfect venue to introduce children of all ages to live theatre, being a historic Georgian playhouse and one that’s so intimate you will start believing you are on stage with Mother Goose and friends! Did you see Mother Goose? Feel free to post comments!