Tony has undertaken extensive research on Dan Leno – the greatest Music Hall star of all time: the first stand-up comic, the best-loved pantomime dame and the world champion clog dancer with a strong line in character-based skits.

Dan Leno was, quite simply, the comic genius of his age and his work laid the foundations for contemporary British comedy. Billed as ‘The Funniest Man on Earth’, he created the modern pantomime role of the Dame and what is now called “stand-up comedy”.

Dan Leno blazed a trail long before Ronnie Barker’s monologues, Les Dawson’s wordplays, David Walliams’ cross-dressing, Michael Flatley & Max Wall’s feet of flame or even Chaplin’s struggling little tramp. With live musical accompaniment, this romp through entertainment history brings the Nineteenth Century showman to life and with it, an understanding of how British comedy has evolved.

Tony has created several works around the history and story of Dan Leno’s extraordinary life and work.

An Audience with Dan Leno

A 5 part series adapted & performed by Tony Lidington for BBC Radio 4 recorded in front of a live audience at The Concert Artistes Association (CAA), Broadcast December 2006

There Will Be Fun

In 2017 Tony Lidington performed in ‘There Will Be Fun’ – an animated exhibition for The British Library about Music Hall with films & performances. Tony presented Dan Leno. 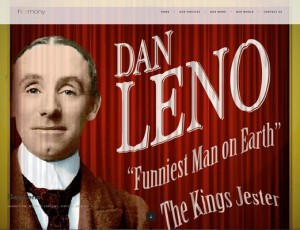 In 2015, Tony worked with Harmony Augmented Reality Company to produce the first ever 3D avatar of Dan Leno: working with Dan’s 1903 cylinder recording of The Grass Widower, Tony performed and recorded the role in perfect synchronicity with the original recording. His movements were plotted using infra red and Wii cameras, so that it could be realised as a downloadable app. It was first presented at Earls Court as the development of entirely new technology to retrieve historical performance.  See the App in action here 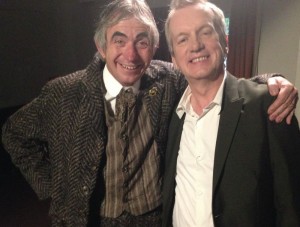