If you haven’t heard about it by now, click here to find out more: http://www.prom-prom.com/raree/

On Tuesday 5th August, Laura, one of our trainee producers, Steve, our trusty camera man, and Tony (the star of the show!) all finished work on the cart and did some rehearsing. The audience experience the story from the inside of the cart, but it is also vital that the outside of the cart is aesthetically pleasing – as the peepshow is ‘street entertainment’, the public will need to stop and take notice. The peepholes, backdrop and projector are all in place now.

Filming and audio recording commenced on Thursday 7th August. Here’s a picture of Steve and me setting up the green screen, in front of which Tony proceeded to prance about in various different costumes.

All of the characters are played by Tony, so it’s a testament to his talent that he is able to assume so many different personas in such quick succession. 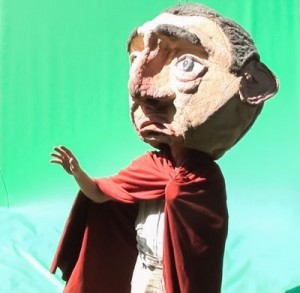 And, of course, we can’t forget the Raree Man himself!

Tony also recorded some quite powerful audio passages with Steve – including an ominous speech by a devil with a Yorkshire accent!

Overall, the project is coming along fantastically; Laura and I have had the pleasure of viewing some of the edited footage already, and it’s brilliant. Expect more news soon!

The Peepshow Project is well underway!