“A Fantastical Phantasmagorical Phenomenon for the Twenty-First Century – ghosts, gauzes and grandiloquence.” 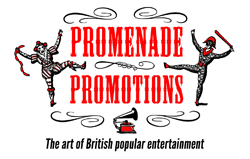 Dr Tony Lidington considers the possibilities and practicalities of re-imagining a phantasmagoria for our conflicted postmodernist age of cynicism and credulity. What are the constituents of a contemporary phantasmagoria show and how might they be recreated for a paying public today? Tony is a showman and a researcher based at the drama department at Exeter University – he uses a combination of live and mediated performance to recreate historical popular entertainment forms such as his peepshow and pierrot troupes. Tony has recently been developing initial ideas about recreating a phantasmagoria with Dr Richard Crangle and Jon Primrose (technical manager at Exeter University Drama Department).’ 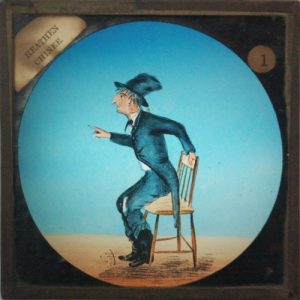 My interest in pre-cinema and the evolution of storytelling through the animation of objects and their images has grown from my performance practice as a showman. For the last 35 years, I have presented shows on streets, promenades, car parks and fields – these have been accessible, family entertainments based, on historical – one might even say, vernacular, British popular entertainment forms. I ran the last professional seaside pierrot troupe ‘The Pierrotters’ for 27 years, a booth-based puppetry and variety act called ‘Poppets Puppets’ [*] for 12 years and most recently, a fairground sideshow booth called ‘The Imaginarium’ and my flea circus (irritatingly fun)! I perform in the guise of my showman alter ego ‘Uncle Tacko!’, whose banter and shameless bravado in accosting passers-by in a manner which is both charming and alarming in equal measure, has earned me a living for more than 3 decades and given me access to venues, or pitches, of both high and low status. All my work is designed to explore the form through research and then to apply that knowledge through practical application in contemporary contexts: I am not interested in presenting historical re-enactments, but rather to be able to re-present or re-imagine the essence of these forms for a modern audience and in modern settings.

More recently, I became intrigued by looking at the ways in which these 19th Century forms had been informed by their predecessors – the itinerant Raree Men and their peepshows  of the late Eighteenth and early Nineteenth Century, whose storytelling using objects, gadgets and chutzpah, wove together fact, fiction, history, science, morality, magic and wonder and brought it all to the towns and villages all over Britain. I have worked closely with the Bill Douglas Cinema Museum and the academics at Exeter to develop ideas on these themes, which resulted in the creation of my peepshow, which some of you here will have seen at the International Convention at the Birmingham Mechanics Institute last year. 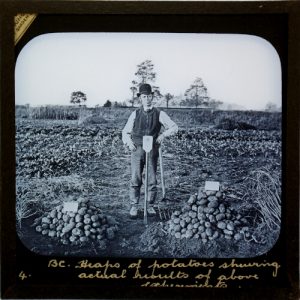 Last year, I was commissioned as part of the ‘Million Pictures’ initiative, to devise and present a performance with my peepshow using some of the many glass magic lantern slides archived at the Royal Albert Memorial Museum (Exeter) and digitise by Dr Richard Crangle – his was such a cranky-sounding name, that I couldn’t resist calling the show ‘Lucky Dicky Crangle & the Cinnabar Moth’ 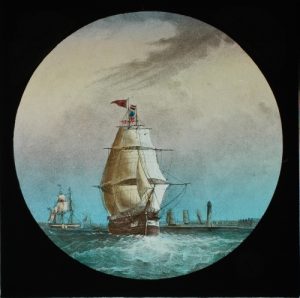 It was whilst at the convention that I saw the performance produced by Martin Gilbert, using live dancers, sound and a triple lantern projector using a multitude of extraordinary slides and was introduced to the notion of phantasmagoria.

As a director of pantomimes and variety shows for some decades, I am familiar with many of the stage tricks and illusions that are part & parcel of the staging of such spectacles. I also come from a background of creating shows in confined spaces such as booths, peepboxes, ships’ holds and churches – locations where the environment or physical context adds enormously to the experience of the performed material. Indeed, my work with people of different abilities which explored differing ways of connecting to an audience using sound, smell and even touch in some instances, combined all the possibilities of haptic and mediated experience to create what is nowadays called ‘immersive theatre’. The Phd which I completed through Exeter University drama department last year was, in large part, a description of this flexing between outward showmanship – drawing the crowd towards an increasingly intimate relationship with the story and its teller and the employment of every senses for maximum visceral impact upon the individual. In Martin’s production at the convention, I glimpsed the way in which live action and projected action and illusion might interact, using all available theatrical devices. 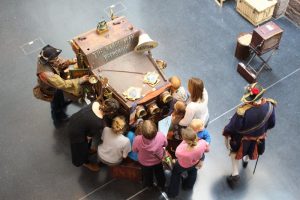 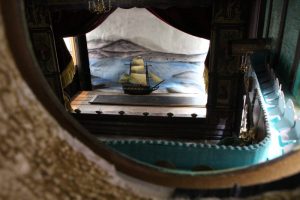 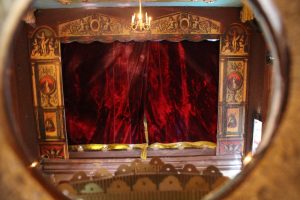 There are companies like 1924, who use contemporary 3D mapping with live action to create a disorientating world of surreality – almost like a living graphic novel, but my academic research tendencies led me to want to explore the world of phantasmagoria in more detail. I have had one day of experimentation at the Roborough Studios on Exeter campus – with Jon Primrose and Dr Richard Crangle and it was Richard who put forward the key questions that arose from our initial enquiries:

“What do we mean by phantasmagoria? It seems to imply all kinds of different things, in different contexts at different times in different places… What are the common strands and what does it all mean?”

I have only started to scratch the surface of thinking about all this, but as I am sure many of you here are aware, the leading light in Britain, at least, has been Mervyn Heard – whose light sadly went out at the end of last year, before I had the chance to meet him. But his writings have provided me with a fount of information, for example, from his PhD thesis:

“…despite the fact that modem special effects technology is so advanced, the cinema experience is paradoxically, in many ways, a far more passive medium. In the case of cinema the spectator is ultimately safe. He is merely an observer, examining a situation which has been pre-recorded and fixed in every detail. With the phantasmagoria the spectator was a physical participant in an essentially live experience. …the audience were forced to commit themselves not to a virtual, but to an actual journey via gravestones, cloisters, or from one dark chamber into the next to a place unknown. At certain times they might become physically disorientated, literally deprived of their senses and even held captive by the magician. Their sense of visual understanding was also being constantly challenged.”

In cinema the focus of our attention is always the same – the screen, but we are living in a age when audiences are forsaking the conventional cinematic experience and beginning to experience the possibilities of hologram projections, virtual & augmented realities, there is also a resurgence of visceral, collective experiences with escape rooms, fantasy themed hotels and dining experiences, laser questing and live roleplay. It is surely no coincidence that as people find that the 2D cinematic experience is limited in its impact, so the haptic experience that has been central to storytelling for eternity comes back to the fore. The phantasmagoria has the potential to be this multi-media assemblage providing a visceral immersive experience for the 21st Century: 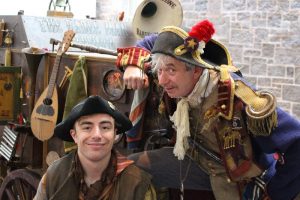 Conventionally, the phantasmagoria is an optical spectre-show with supernatural, morbid or exotic connections. The definition of the most appropriate atmosphere is given by the originator of ‘Strawberry Gothic’, Horace Walpole, as “Gloomth” – a sepulchral, warm darkness. The phantasmagoria show itself is founded on discontinuity, transformation and surprise – using what Heard distils into its 5 key features:

However, there could be any combination of the following elements: showmanship, darkness, smells, touch, music, sound + vibration, ventriloquism, ritual & incantation, false walls, illumination, illusion & magic, projection (both back and front) onto gauze, spray, steam, smoke, dissolving views, small audience numbers… all in an appropriately “gloomth” location such as a crypt, locked attic or railway arches. 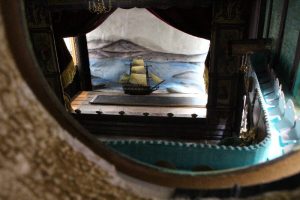 More extreme techniques were employed from the earliest times – in the 1770’s, Germany’s Johann Georg Schrepfer drugged the food of his attendees prior to the performance and in the late Nineteenth Century, the audience occasionally received electrical shocks. Sadly, health and safety has gone mad in recent years and such techniques are rather more difficult to employ…

Mervyn Heard clearly shows the links of the phantasmagoria to the schlock-horror films of the 50s & 60s and I would argue, subsequently to the gaming environment of our contemporary age. Using all the above the techniques, the aims of the phantasmagoria were really quite simple: tease the audience; then surprise them with the sudden and alarming presence of the supernatural or monstrous; then provide some means by which to banish the demons to oblivion. As he says:

“…it is not the lanternist’s humble machine or box of enigmatic images, but his presentational processes – the use of anticipation, disorientation, autosuggestion, the tactical surprise and the sense of physical adventure – which were to be his lasting legacy to the film-maker.” 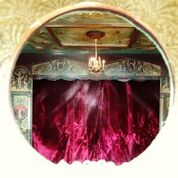 The Gothic Romanticism of the Nineteenth Century which is the heyday of phantasmagoria shows was an intellectual and cultural counter-revolution to the determinism of the enlightenment. Although this period was one of an exponential fascination with scientific discovery, nomenclature and taxonomy, it runs parallel to an emerging interest in the more inchoate territories of psychological and paranormal phenomena. It was an age of wonder, where the edges of science and art blur in what were known as ‘natural sciences’ and it is my contention that we have reached just such an age once again: we are now embarking upon a profound and lasting revolution in digital information, every bit as transformational as that of the Age of Wonder and imperialism, it is quite possibly far more of a paradigm shift than the introduction of the printing press.

It is in this context that I think it is worth exploring the phantasmagoria through action research: I would like to work with others who share my interest in creating a 30-45 minute visceral experience for a contemporary audience that utilises all the methodologies of the earlier form and combines it with contemporary technologies and possibilities. I wonder if it is possible to recreate the sense of fear, wonder and thrill for a 21st Century audience through a re-imagined phantasmagoria? I wonder if such an installation could be marketed as a commercially viable proposition, an attraction in its own right? I wonder if such live augmented reality techniques are as affecting in an age of virtual reality and dizzying technology? From my work on the peepshow, my suspicion is that the live, haptic experience remains as profound and exciting as ever, but it needs research and development in order to start the exploration: my hope is that perhaps we could start to collate a shared site specifically for phantasmagoric slides and begin a process of research looking at projection and lighting techniques, sonic experimentation and performance styles. Think of me as the necromancer or imp-master – like Mephistopheles, conjuring you academics, anoraks and acolytes to provide a phantasmagoric portal to an occult world for a new age of wonder. Which of you will join me on that journey?